You should spend 20 minutes on this task.

The two maps below show an island, before and after the construction of some tourist facilities. (This is an answer written by a candidate who achieved a Band 7 score.)

Summarize the information by selecting and reporting the main features, and make comparisons where relevant. 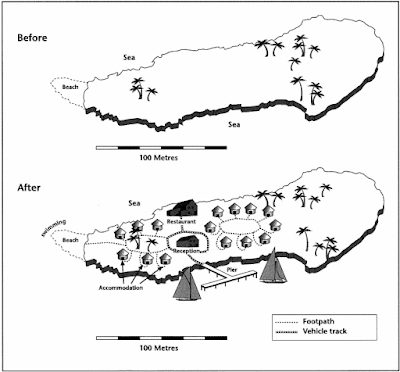 The two maps show the same island while first one is before and the second one is after the construction for tourism.

Looking first at the one before construction, we can see a huge island with a beach in the west. The total length of the island is approximately 250 metres. Moving on to the second map, we can see that there are lots of buildings on the island. There are two areas of accommodation. One is in the west near the beach while the other one is in the centre of the island. Between them, there is a restaurant in the north and a central reception block, which is surrounded by a vehicle track. This track also goes down to the pier where people can go sailing in the south sea of the island. Furthermore, tourists can swim near the beach in the west. A footpath connecting the western accommodation units also leads to the beach.

Overall, comparing the two maps, there are significant changes after this development. Not only lots of facilities are built on the island, but also the sea is used for activities. The new island has become a good place for tourism.

Task Achievement
This answer clearly presents the key features of the diagrams, and although the first map is described only briefly, this is acceptable for this particular task. The description is accurate thought some aspects, such as the section on the accommodation, could have been more fully extended. The final paragraph summarizes the main points effectively.

Coherence & cohesion:
The information is logically organized and can be easily followed throughout the response. A range of cohesive devices including reference and substitution is used appropriately, with only occasional inaccuracies.

Grammar:
There is a variety of grammatical structures and many sentences contain no inaccuracies. Where errors do occur, they do not affect understanding.